Lapresta’s first loading at the Total refinery in Antwerp

Lapresta’s first loading at the Total refinery in Antwerp 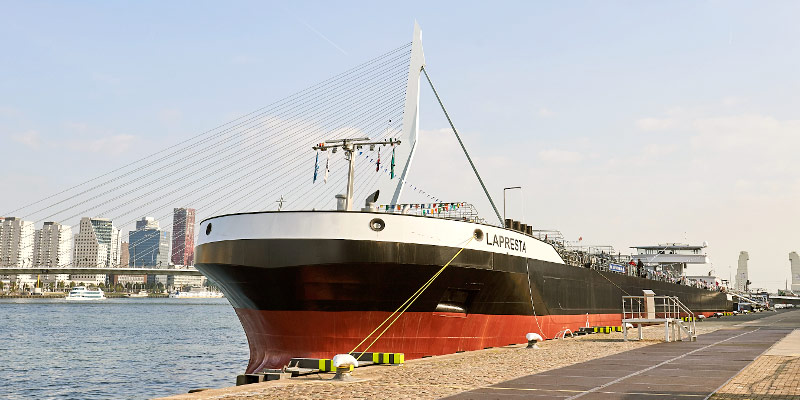 The 20th of October, the Lapresta completed its first loading shipment at the Total refinery in Antwerp. This unit is owned and operated by Asphatrans, of which CFT is a 50% shareholder, along with Jaegers, a German inland navigation company.

Lapresta is one of a kind, and in several ways:

Beyond the numbers, this unit is unique for several reasons and the technical challenges were abundant during its construction in Serbia (Kladovo) for the hull and Holland (Rotterdam) for outfitting. Close collaboration between the two shareholders’ technical departments was necessary during the unit’s 20-month construction period.

The charterer of Lapresta, our customer Total Petrochemicals & Refining NV has invested heavily in its European site in Antwerp to gain competitiveness and upcycle the bitumen residue from its Antwerp and Flessingen refineries. Lapresta is the strategic ‘pipeline’ that connects these two industrial sites. The commissioning of Lapresta and the contract with Total is the culmination of a multi-year project for CFT to convince the customer, set up this European partnership, create Asphatrans and deliver Lapresta according to customer expectations.

Both the shareholders’ teams can be proud of the confidence and long-term commitment the Total Group has shown in this exceptional adventure.

Happy sailing to the Lapresta, its captains Johannes Groot and Ryszard Debicki, and to the crews!